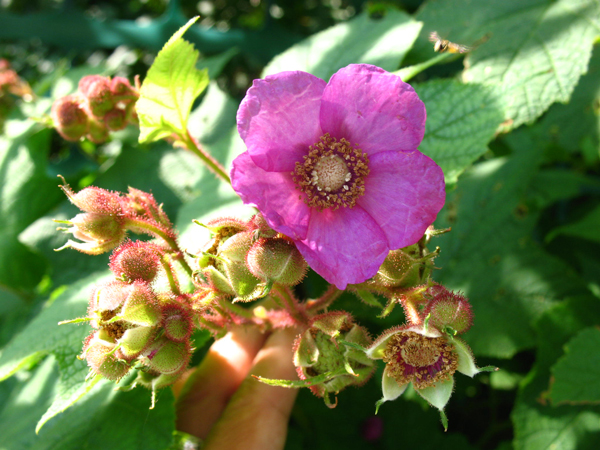 Purple flowering Raspberry (Rubus odoratus)  is one of my favorite summer flowering shrubs (click photo below for an enlargement).  It is native to Du Page County, but rare in surrounding counties,  and introduced in some counties according to Swink and Wilhelm.   I have seen it growing naturally in some local woods but not very often.  It grows 4-6 feet high, and like other raspberries it forms thickets, 8-10 feet wide.  Unlike other native raspberries, it does not have thorns, which is one reason I like it.   I really  like this shrub because it has beautiful quarter sized magenta purple flowers which bloom for a month  or more in midsummer, before developing into tart, dime sized, domed shaped raspberries.    I like to put the tart berries on ice cream or cereal, similar to black chokeberries, as described in the article “Black Chokeberry – not just for the birds” .  You can tell the raspberries are ripe when they are deeper red and easy to pick off.   Birds and other small mammals also like to eat the berries  and bees gather nectar and pollen from the flowers.   The leaves are maple shaped and turn a dull yellow in the fall.  It prefers medium to moist soils, sun to part shade.   They will bloom very little and produce minimum berries if planted in deeper shade. My raspberries are growing along the side of my garage where they can spread. I often see birds seeking shelter (cover and shade) in the thicket of my raspberries throughout the year. Smaller than supermarket raspberries, but I still like to eat them.

Since it is in the rose family,  Japanese Beetles are sometimes a problem.  I suggest tossing the beetles in a large cup of soapy water in the early morning as soon as you see them on your plant.  I read that japanese beetles have a way of notifying other Japanese Beetles, so it is best to control them immediately.   I know my local skunks, moles,  birds and other wildlife help out by eating the grubs.  A good friend of mine freezes the beetles in  freezer bags, and then feeds these beetle popsicles to the squirrel!