Bison are back in our Illinois Prairie!!! 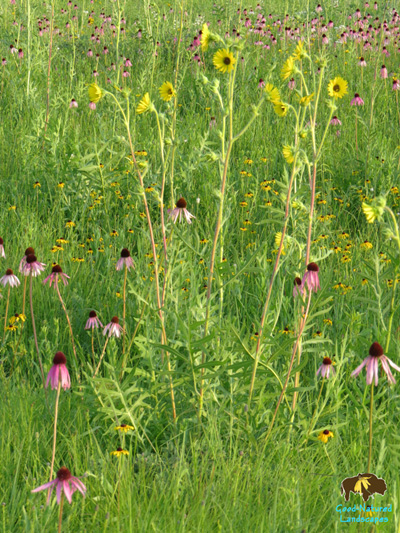 “WHAT A THOUSAND ACRES OF SILPHIUMS LOOKED LIKE WHEN THEY TICKLED THE BELLIES OF BUFFALO IS A QUESTION NEVER AGAIN TO BE ANSWERED, AND PERHAPS NOT EVEN ASKED.” – ALDO LEOPOLD

When I first  read the above sentence from Aldo Leopold’s book Sand County Almanac my eyes teared up knowing how sad but true this statement was.   I’ve read other books (I can’t remember which) of early explorers observing bison drinking water along the banks of the DuPage River, practically in my backyard. What an awesome sight, even for our early explorers.I’ve always tried to imagine what Illinois was like, covered in 22 million acres of prairie, almost 2/3 of the state, with many animals and other wildlife,  including the beautiful bison, roaming the land freely. Estimates indicate 40-60 million bison once  lived in North America. My love of the prairie and my sadness over the loss and mass slaughter of this majestic animal,  has lead to my deep appreciation and interest in the bison.  I even incorporated the bison in to my company logo because of  this connection. I’ve been fortunate to travel to many places to view the bison throughout the U.S and list them here in case you are interested in visiting them also: Yellowstone,  Neal Smith National Wildlife Refuge and Prairie,  Oklahomas Tallgrass Prairie Preserve,  Badlands, Custard State Park,  Theodore Roosevelt National Park, Illinois’ Fermilab, and several other places.  I remember my husband and I sitting on a dirt road in our van at Custard State park while hundreds of bison slowly passed all around us, mother bison keeping a watchful eye on us when the younger bison passed.   It was a minor  glimpse of what it might have felt like when thousands of bison passed the Native Americans and Early Settlers, shaking the earth beneath them,  like in  the movie “Dances with Wolves” .   I had the honor of visiting  “Miracle“ the white bison born in Wisconsin and a sacred symbol to many Native Americans.

But what was once a dream, is becoming a reality. Bison are back at Nachusa Grasslands Prairie in Illinois!!!  Hurray! Nachusa Grasslands has introduced a small herd of pure bison this past  September 2014.   I say pure bison because some bison have been crossbred with cattle and are hybrids.  Also, they are obtaining pure bison from several places out west to maintain genetic diversity,  which is also important.  They plan on slowly introducing more bison in the future.   Although I wish I get up close to the bison as I did at Custard State Park, I respect Nachusa trying to minimize human contact with the bison to reduce stress and to keep them truly wild. Eventually Midewin National Tallgrass Prairie will  also introduce bison  and will trade bison with Nachusa to maintain genetic diversity.  Like many other wildlife, bison are an important part of the prairie ecosystem and researchers believe the bison will add many benefits , not only to the prairie plants but to wildlife including insects, reptiles, amphibians and birds.  The bison’s dung, the wallows it creates and the grazing of grasses, all play an important role in the prairie ecosystem. Scientist and restorationists will be gathering and comparing data on their impact at Nachusa over the years. To celebrate this great event, I’ve trimmed the overgrown yews in my front yard in the shape of a large bison!  🙂 See photo. If I can’t have a bison in my yard, why not a bison yew?

If you’d like to read more about the bison at Nachusa and their benefits, please check out The Nature Conservency’s website on Nachusa. and please do what you can to learn about and support one of the rarest and most endangered ecosystems in the world,  the Tallgrass Prairie.